Current Neodymium catalyst systems for the solution polymerisation of Butadiene, generate a small but significant portion of high molecular weight polymers, generating what is called a “hard” rubber, that is difficult to process in the tyre industry.

In addition, the rheological properties of the rubber are influenced greatly by the presence of this small portion of high Molecular Weight (MW) rubber. Commercial rubber manufacturers try to compensate for this phenomenon, by manufacturing rubber with a lower average numbers based molecular weight (Mn), for a given rubber Mooney viscosity. Unfortunately, such rubbers have inferior physical properties, and remain difficult to process.

A comparison of the GPC MWD of a commercial rubber, and a rubber made with COMCAT Nd-FC/G6 is as follows: 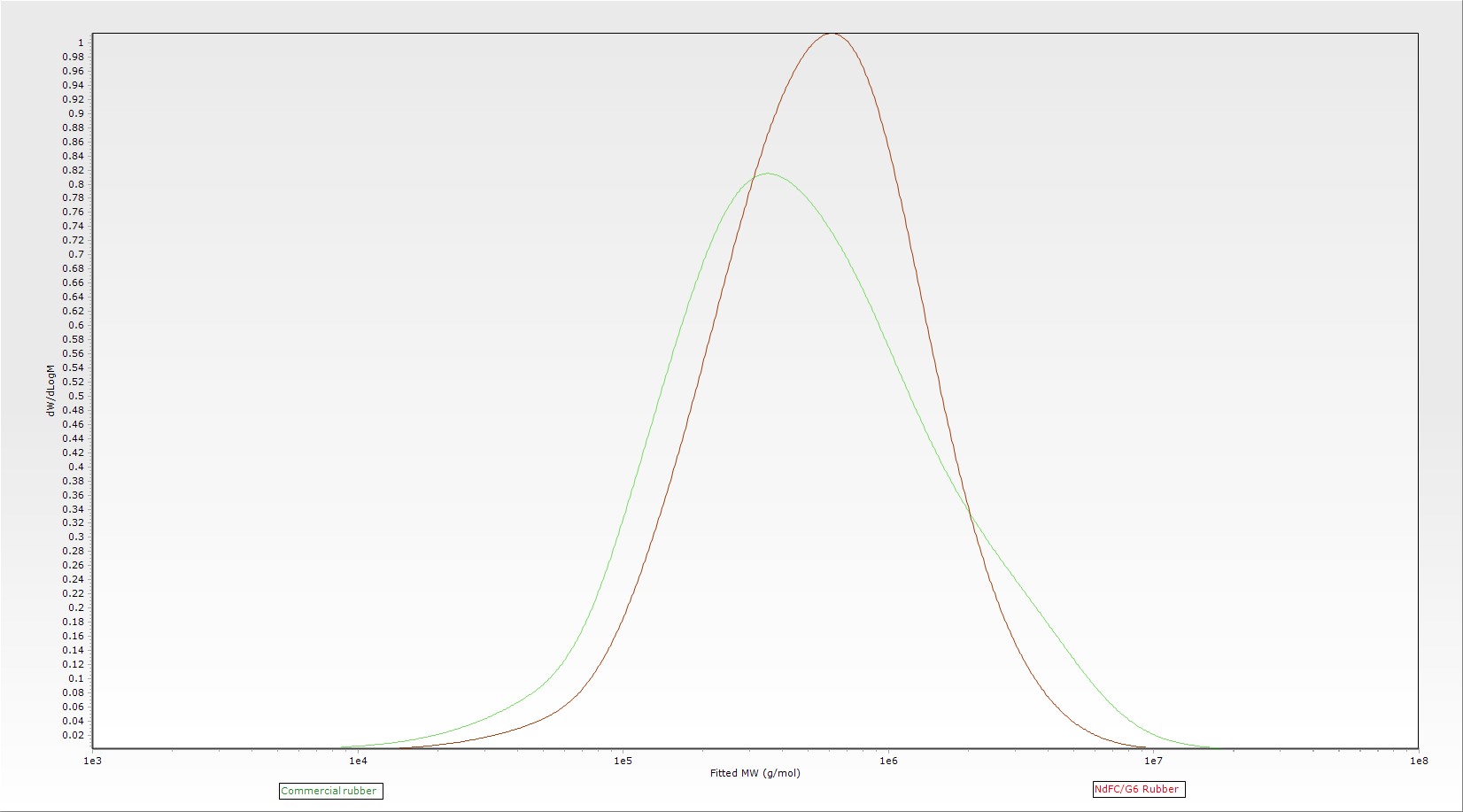 It is noted that for the same rubber Mooney value, there are very significant differences in the two polymers :

The Nd-BR with made with the Nd-FC/G6 catalyst has almost 40 % higher Mn, and therefore the elastic properties of the G6 rubber compound will be better.

Better rubber strength, less wear, higher rebound, are some of the superior properties, that can be expected in rubber compounds that incorporate Polybutadiene made with COMCAT Nd-FC/G6.

The Nd-FC/G6 rubber has a much narrower polymer MWD, and much less high MW “dangling” ends in the distribution, which has the following advantages:

It is possible to use COMCAT Nd-FC/G6 as a ready-made catalyst on its own to polymerize polybutadiene, to manufacture a polymer that is easy to process by rubber compounding systems, yet provide very good physical properties of vulcanized rubber.

Well documented Industry practice is also to use a co-catalyst, such as Di Butyl Aluminium Hydride (DiBAH), in addition to a finished catalyst. The purpose of the additional DiBAH dosage into the solvent/monomer mixture, is as follows:

Catalyst systems employing the use of DiBAH, tend to be more cost effective, but some compromise between rubber quality and catalyst system cost is normally accepted.

Dosages are based on COMCAT Nd-FC/G6 in its commercial solvent-free form, at a Nd concentration of 0.28 mol/l.

Control of a Polymerisation reactor is a multi-variable problem. Many factors play a role, such as:

Many combinations of these parameters exist to achieve a given BR Mooney viscosity. Comar Chemicals (Pty) Ltd is able to assist with detailed polymerisation recipes, to optimise catalyst system costs, whilst achieving the desired rubber compound physical properties.

The COMCAT Nd-FC/G6 finished catalyst, at the recipes and utilization rates described earlier, is particularly suitable for the production of synthetic Polybutadiene rubber for use in the tyre industry for the manufacture of high performance radial tyres for passenger vehicles, that need to meet the stringent requirements of new legislation aimed at reducing the environmental impact of automotive mobility.

In addition, the Polybutadiene rubber made with COMCAT Nd-FC/G6 is suitable for the manufacture of truck tyres, with extended durability.